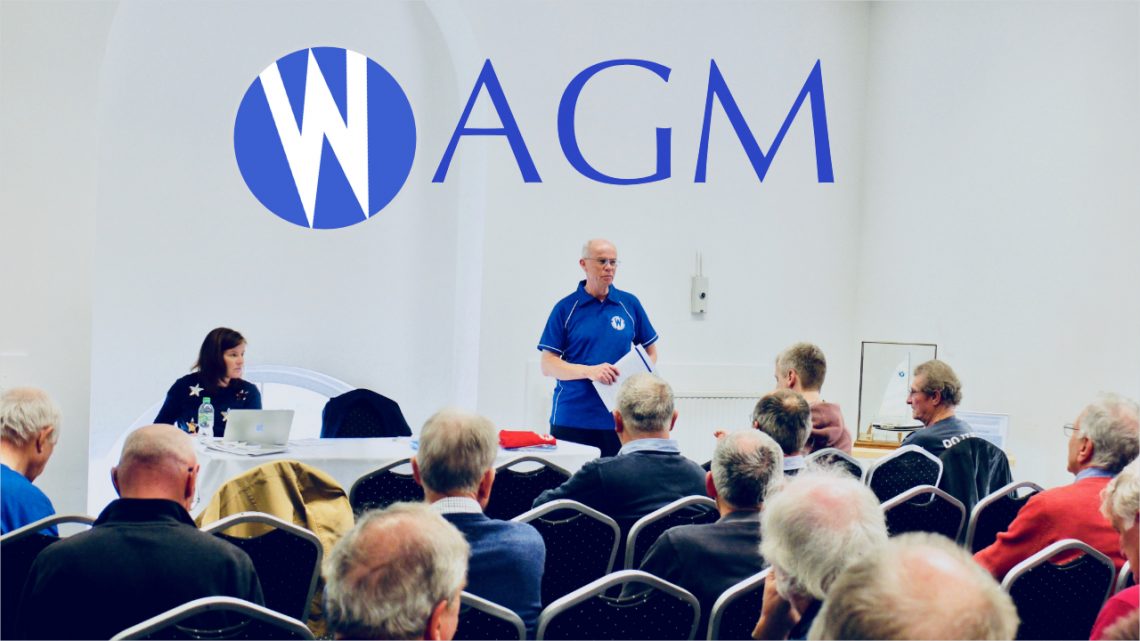 To be held Virtually on Zoom

Email or postal invites will be sent 28 days before

The Chairman, John Renouf, welcomed approximately 21 members and thanked everyone for attending.

3. Acceptance of Minutes of previous AGM

Simon Edsforth is to produce a flyer which can be downloaded from the website to hand out at sailing clubs. Action carried forward from the 2019 AGM.

It hardly seems to have been a year since I last addressed this Annual Meeting but it has, and it has been a typically busy year for the Class Association. I will leave others to fill in the details and keep my own presentation as short as possible, but I will take this opportunity to acknowledge that the success of our events programme is due in no small way to our members that are willing to travel, sometimes considerable distances with their boats in tow, to participate enthusiastically in whatever activities are offered both on and off the water. Participation at our events is at a satisfying level that justifies the efforts of the organisers both within the Association and at our host venues, and due appreciation is expressed to them all.  There will always be room for more participants and we will continue to encourage participation by covering the participation fees of members during this year. The programme for 2020 has been “tweaked” with some venue changes, and WandererFest will again take place at Cobnor to the established format.

The enthusiasm of the Committee continues unabated and for this I, as Chairman, am immensely grateful as it makes my task much easier, so my thanks go to them for their work over the past year. Whilst I normally subscribe to the philosophy of “don’t fix what isn’t broken”, for an organisation like ours to thrive we need to bring in new ideas and expertise to help us to move forward and keep up with the “real world”. There is no better illustration of this than with the Wanderer magazine that has significantly benefitted from the involvement of Simon, who has injected his own brand of knowledge and enthusiasm together with his creative flair and knowledge of current technology to restyle the publication and also streamline the production process. I am keen to recruit new and hopefully “younger” members to the Committee, not only to reduce the average age but also to provide knowledge of the latest version of the Hartley Wanderer. The number of these boats attending events is gradually increasing and I feel that the owners of these boats should be better-represented on a Committee that currently has between them seven Anglo Marine boats and one Porter boat. The Committee normally meets twice a year in addition to the AGM, with much business being completed by email so the time commitment is hardly arduous, and diversity of input is much needed.

Now it remains for me to hand over to the Committee officers to present their respective reports but first let me thank you all for attending this meeting and for your continued support of the Class Association.

He confirmed that the membership would remain at £22 and the Association would continue to fund the participation fees for members attending WCOA events.

He thanked Ray Tennant for the prompt auditing of accounts.

Jenny Renouf reported that there were 186 members of the WCOA at the 31 December 2019, including 7 Honorary members. 18 people did not renew.

Hartley boats had sold 19 new boats but some of these were late notifications again.  1817 is the latest boat number.  The new boats that were notified late in 2018 are due to renew their membership for 2020.

Bob Rastrick asked if there was an increase in membership in the North. Membership records would need to be assessed in detail for this information to be obtained.

Mike Bennett unfortunately couldn’t make the AGM. The Chairman reported on his behalf.

This new system competed in two races in 2019, one of which was very light winds and the other very strong winds. Due to the limited amount of races where this system was used and the extreme of conditions, it was decided that there was not enough evidence to determine the performance of the system. Therefore it was decided that the dispensation of the twin spinnaker pole system would continue for another year.

It was noted that the system as an option for the Wanderer has been removed from the Hartley website.

Bob Rastrick asked for advice about removing a weighted centre board. The meeting suggested several methods to achieve this.

This is the 5th year at this venue. Hopefully better conditions as last year was raced through storm Hannah.

This coincides with the VE day celebrations

Last year’s event was reported by Richard Maltby. The event was a great success with 12 entries. Won by Tim Barr with Mark Skipper. On Sunday there is a cruise planned sailing past a seal colony area.

This is the 5th year at this venue.

The Associations flagship event for the 6th year running

All events will be free for members, with participation costs covered by the WCOA.

Philip Meadowcroft thanked all the event organisers and would like to hear from anyone who would like to organise future events .It was good to see more planned events in the north of the country.

John Renouf expressed an interest in recruiting new members to the committee especially younger members to keep the Association healthy for years to come. No volunteers were forthcoming at the meeting. Mike Hamilton had decided to stand down from the Committee and his position as Webmaster. He noted that Simon Edsforth had agreed to take on the website in the absence of any other volunteer.  Mike was thanked for his long and significant contribution to the WCOA Committee in several roles.

It was proposed to re-elect the other Committee members en-bloc. Alan Laight proposed, Lindsey Weatherly seconded.

Jill Davis awarded the trophy to Simon Edsforth who has provided strong commitment to the committee and exceptional enthusiasm producing the class magazine. Unfortunately Simon was unable to attend the AGM.  Jill will present the award in person at a later date.

There was only one nomination for the trophy which was awarded to Richard Austin for his exceptional navigational skills in the wrong direction.

During lovely conditions on the Salcombe cruise 3 boats set out on an epic cruise. All was going well until Snapes Point where 2 boats went in the planned direction. Richard, however, decided to follow totally different boats and go on an altogether unique solo cruise .

The award was presented by John Renouf.

An e-mail was received by the committee with regard to a self-launching whisker pole being accepted by the Class Rules. It was unclear whether this was to be used in racing or cruising. It was decided that the committee would further investigate the circumstances where this would be used and if a class ruling would be applied.

Jenny Renouf reported that there had been a modest sales of the new regalia that had provided a small profit to the association. 9 T-shirts, 6 polo shirts and 2 jackets have been sold. Please let Jenny know if there is a particular item that you would be interested and she will obtain a price from the supplier.

Bob Rastrick did a presentation about a scheme to fix derelict hut roofs commonly found on sailing club accommodations. This has been used on Rotherham SC. It is called Fix My Hut Scheme. It is run by a company called Iko roofs. If your sailing club needs a new roof its worth applying

The IKO Fix That Hut scheme, repairing roofs in the community. The campaign was launched in 2006 to celebrate IKO’s centenary year, and was inspired when the company pledged materials were originally used in 1911. The ‘Fix That Hut’ campaign seeks out needy projects such as village halls, scout huts and other buildings which are at the heart of local communities with the UK. IKO will donate free waterproofing materials for successful and deserving projects.

This site uses Akismet to reduce spam. Learn how your comment data is processed.