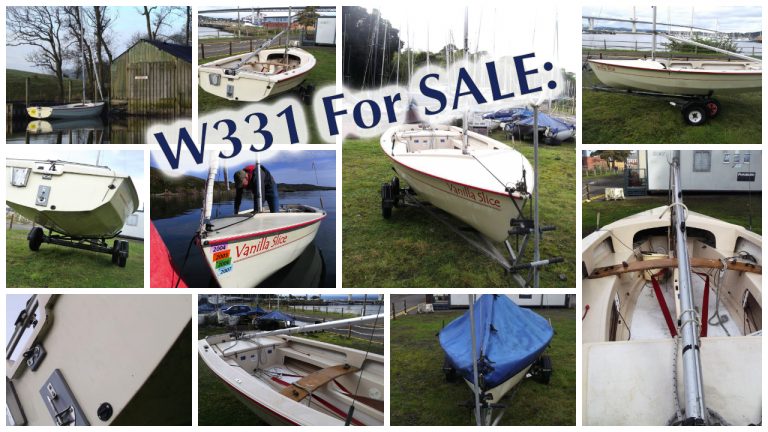 I’ve had the boat since 2007 and have had great times sailing it on the Forth, the West Coast of Scotland, the Lake District and the Thames Estuary, among other places. It’s a lovely, forgiving boat fit for the sea as well as inland waters. I really have been hesitant about selling it, but I have to face it – I don’t use the boat enough, and it really should go to someone else who will.

The boat is almost forty years old, so there are some bumps and scrapes as you would expect. There is a small patch of repainting on the port side upper hull, done before my ownership. I think that was caused by chafing on a previous trailer. The biggest scrape can be seen on the starboard bow underneath the boat’s name. These things – you can see them in the pics – are cosmetic only. I was about to take Vanilla Slice to Windermere for a week’s sailing when the pandemic arrived and put a stop to that (and some other things). And what with lockdowns, restrictions etc I now find I’ve not sailed the boat for some years. But it has scrubbed up nicely!

Vanilla Slice had new standing rigging in 2008. Vanilla Slice has a boom up cover. It would be nice to get a new one, but the existing one is still doing its job, and with a few easy patches it will last quite a while longer. You can see the biggest hole in one of the pics.

One of the best things with the boat is the David Pegg / Alde Engineering Ltd combi trailer – it is quite brilliant. I bought that new (it was quite expensive) in about 2008 because the trailer on which the boat came was hard to use. This one is beautifully designed and built, and very easy to use. I have a winch for it, so it’s easy to get the boat and launching trolley onto the road trailer single handed, even up difficult terrain. You might think it worth buying Vanilla Slice for the trailer alone!

The boat comes with good sound sails (main and furling jib), perfectly fit for cruising, though slightly baggy. Also with the boat come the combi trailer, winch, wooden floorboards in very good condition (I never used them), an inbuilt aft locker, an anchor and chain, outboard mounting, outboard pad (I think I bought it from Hartley Boats – it’s £200 new now), oars and rowlocks. And various minor bits and bobs.

Pics of the floorboards, anchor and chain, outboard mounting, outboard bracket, oars and rowlocks and various minor bits and bobs included with the price may be requested.

Vanilla Slice is at Port Edgar, 20 minutes by car from Edinburgh, near the Forth Bridges. Buyer collects.